For the third installment of our series, “Keeping Spirits High”, please enjoy the following submission from our wonderfully talented Members.

In this time of uncertainty poems can be solacing.
Last week Barry Mc Govern read this poem Pandemic by the San Francisco poet Lynn Ungar and as Covid 19 increases I cannot see our April poetry evening going ahead so I thought I would send this poem to you to remind you how powerful thoughts can be delivered through poetry.”

“Pandemic”, a Poem by Lynn Ungar

What if you thought of it

as the Jews consider the Sabbath—

the most sacred of times?

Cease from buying and selling.

Give up, just for now,

on trying to make the world

different than it is.

Sing. Pray. Touch only those

to whom you commit your life.

And when your body has become still,

reach out with your heart.

Know that we are connected

in ways that are terrifying and beautiful.

(You could hardly deny it now.)

Know that our lives

are in one another’s hands.

(Surely, that has come clear.)

Do not reach out your hands.

Reach out your heart.

Reach out your words.

Reach out all the tendrils

of compassion that move, invisibly,

where we cannot touch.

Promise this world your love–

for better or for worse,

in sickness and in health,

so long as we all shall live.

“a drawing I did of Carmel (Lynch), aunt of my wife Jane. Carmel, a nurse all her working life, held herself and her staff to the highest caring standards and even in retirement was a fierce advocate for her profession.” 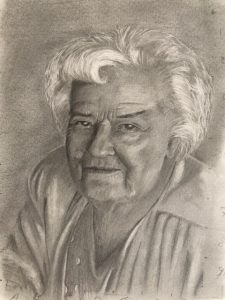 My very own Fairy Tale of New York

In the summer of 2000, I was in New York with a friend. The day before we were due to fly home, we were sitting in a bar in Manhattan when my friend picked up a newspaper from a table and saw that there was a performance of The Ginger Man being performed by the Dublin Theatre Company at The Irish Arts Center in Hell’s Kitchen. We both loved the works of Donleavy and especially the novel which had been adapted for the stage. So, we called the theatre and managed to secure the last two tickets – and this was the closing night of the run. We watched the riotously funny performance and thanked our lucky stars that we’d had the good fortune to see it, and in New York of all places. This is where the coincidences started to happen, however.

The following day, we were trying to kill time before we were due to catch our taxi to Newark Airport. We ambled up Broadway on the Upper West Side and happened to stumble upon an old bookshop – the type with all the narrow corridors and those siding ladders. Not really intending to buy anything, I was just happy to browse – anything to get out of the unforgiving heat of the Big Apple. Sensing that the proprietor was watching me, I blindly grabbed at the row of books directly at my eye level. Then I looked at the book in my hand. It was The Saddest Summer of Samuel S by J.P. Donleavy. I smiled to myself and marvelled at the chances of that.

A couple of hours later, we were sitting in Newark Airport, bored witless. The lift beside us suddenly opened, and a man stepped out. He looked, for all the world, like a weekend guest at a bygone shooting party, at some grand manor house. He was resplendent in his flat cap, Harris Tweed jacket, and highly polished brogues. I did a double take immediately and followed him with my gaze as he moved uncertainly in front of us. I checked my playbill from the previous night and compared the image. It was him – it had to be him.

I didn’t have the nerve to approach him but my friend did once I’d pointed him out. After a couple of minutes in conversation with the dapper gent, he waved me over. Indeed, it was him. We spoke for maybe a quarter of an hour. I’m sure I was just blurting endless questions at him, but he was extremely friendly and had such a wonderful voice that immediately put one at ease – a cross between Frasier Crane and John Houseman. He explained that he was en-route to visit his sculptor daughter, Karen, in Idaho.

I asked him if he had heard The Pogues song, A Fairy Tale of New York, named after his 1973 novel. He said he had and in fact Shane Macgowan, whom he liked very much, was currently in New York. I also asked him had he ever seen Withnail & I? He hadn’t, so I explained that Withnail was surely a latter-day Sebastian Dangerfield, the eponymous Ginger Man and just as rakishly funny. He said in that case, he’d definitely watch out for it.

He asked us who we were flying with and when we told him Virgin Atlantic; he laughed and shook his head, remarking on their choice of using “Upper Class” as an ego-building alternative to travelling in Economy. We spoke about county Meath in Ireland where he lives and where my own Irish parents once had a house. He graciously signed our playbills and shook our hands.

We were to meet him again at one of his paintings exhibitions in Dublin several years later, and even go to his 82nd birthday party at The United Arts Club and out on a raucous night of revelry around the city with his son Phillip. However, on that day, we sadly watched him disappear into the crowd, and like Terence Mann, the reclusive writer from Field of Dreams, into the cornfield he went and a voice inside my head boomed: 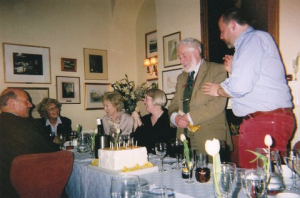 “I returned from a ski trip with my son to the Aosta Valley in Northern Italy on March 1st., to have my wife incarcerate me in “voluntary” self-isolation for two weeks.

Initially it was quite a luxury to be officially exempt from all my domestic responsibilities. I had peace to read a few novels, I began to brush up on my rusty Italian and French, and I intended to pick up my guitar and finally learn how to play it.

However, my concentration and motivation began to wane as the implications of the loss of my life as I had previously known it began to permeate my being.

I have pleasure in sharing the results of my endeavours in watercolour with you.